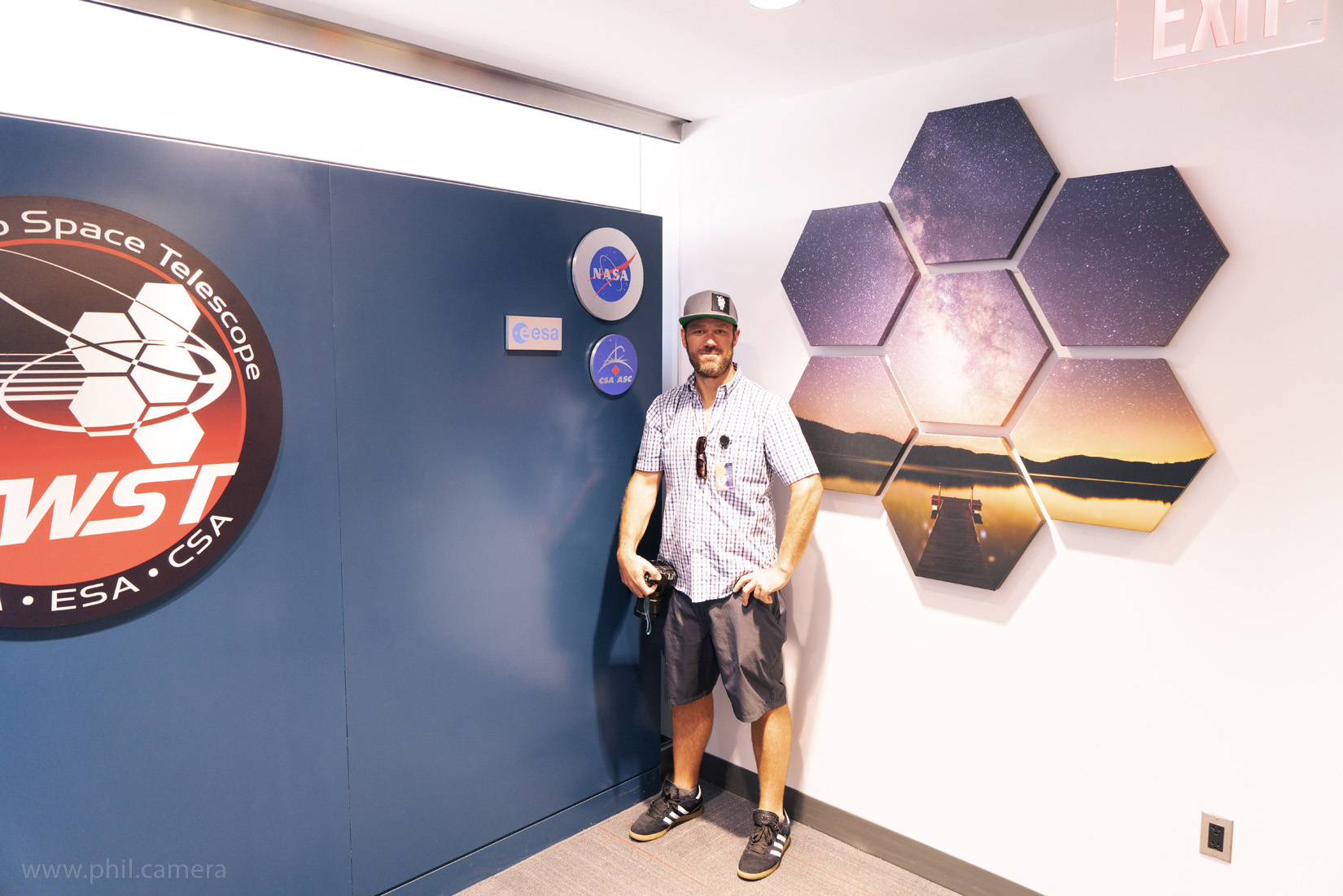 Note: Hexagon Clusters are currently only available via special order (email phil@phil.camera) and on Auction.

Mosby goes to NASA! In mid-2018, I was presented with the opportunity to gift a copy of my 7-panel hexagon piece "Milky Way Over Webber Lake" to the Space Telescope Science Institute. It now adorns the walls of the James Webb Space Telescope Mission Operations Center in Baltimore, Maryland. In late July, 2018 I (along with my friends Scott and Kelsen) got a chance to take a tour of the JWST MOC facility, with the remarkable Carl Starr (the Mission Operations Manager for JWST) as our tour guide, and to see my work on the wall with my own two eyes.
It is one of the great honors of my life to know that my work resides in the presence of the men and women who are responsible for what may prove to be one of humankind's most important technological achievements.
Below are some photos from the tour, as well as additional details about the JWST Mission Operations Center and the project itself. 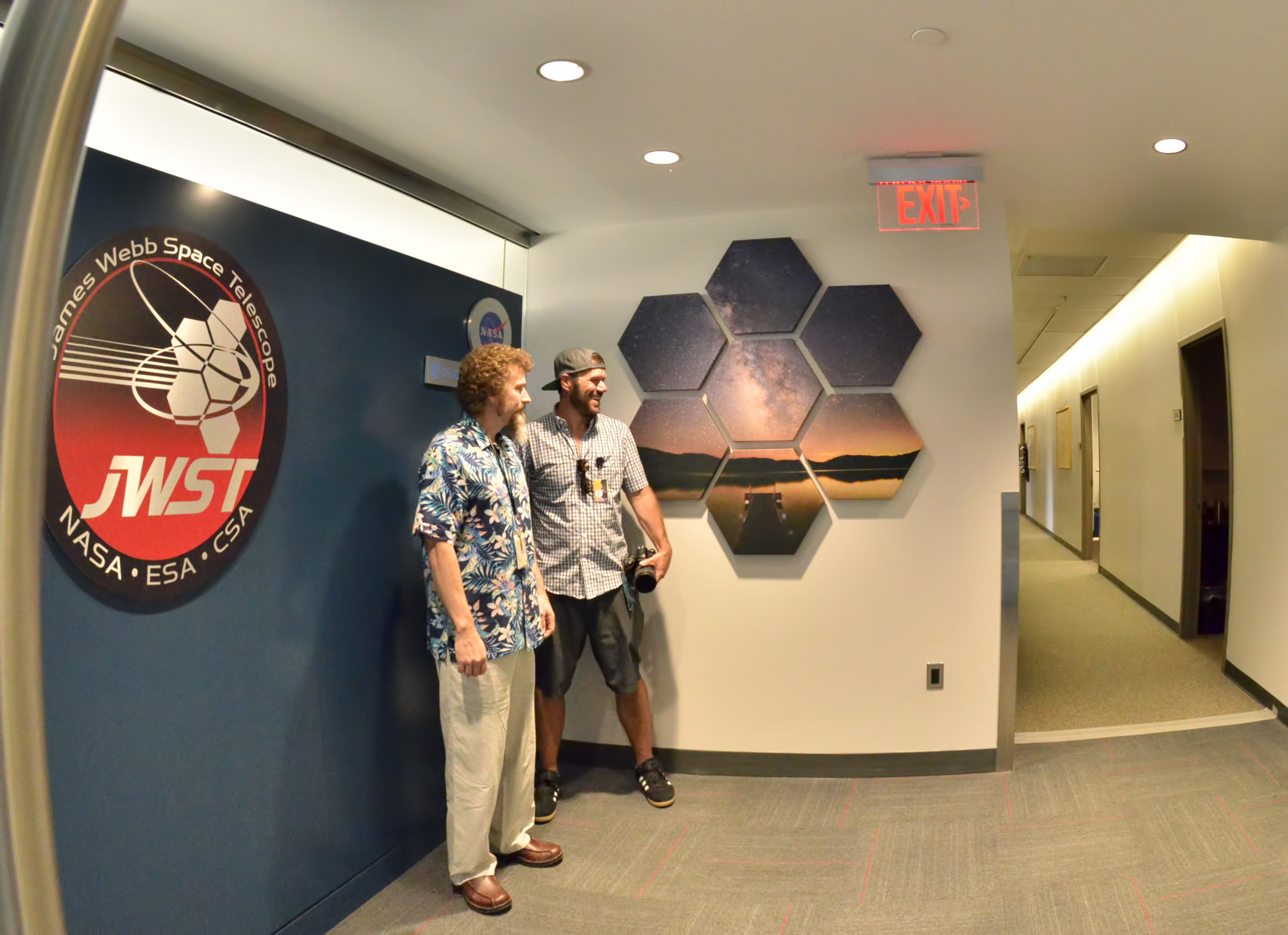 I didn't really ... really ... REALLY believe this was happening until I saw my work on the wall. With me in this photo is Carl Starr, M.O.M. for the JWST mission. 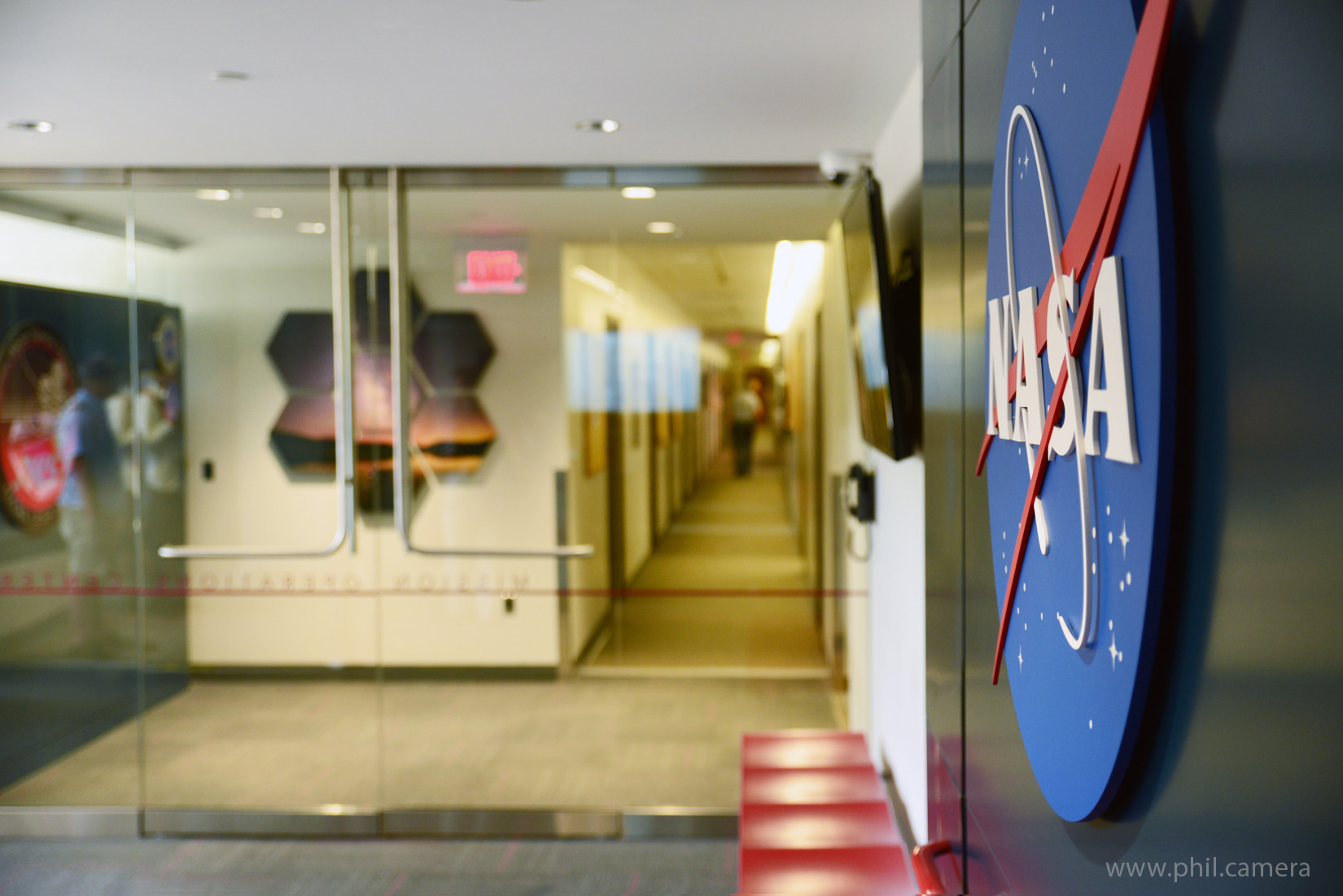 What a surreal feeling (and huge honor) to see my print in the same proximity as this iconic logo. 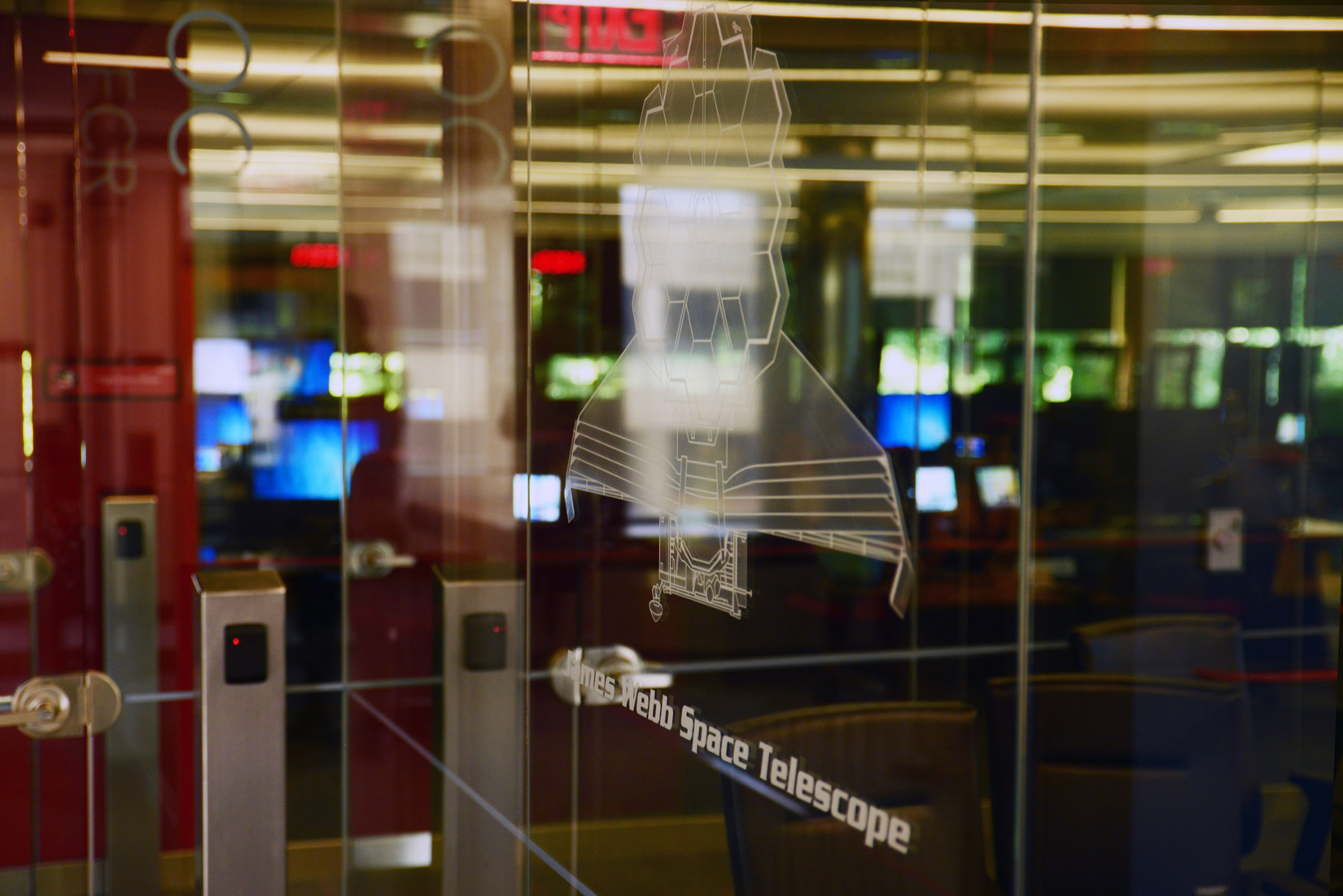 Carl and the other members of the team are clearly very proud of the Mission Operations Center. It was designed with openness in mind. Carl made a point of telling us that, as this is a science-based mission, there is very little that is classified and transparency is incredibly important and core to the way the mission is run, right down to the glass walls that separate the rooms of the MOC. We were allowed to take photos of all the rooms except the conference room where a meeting was underway. 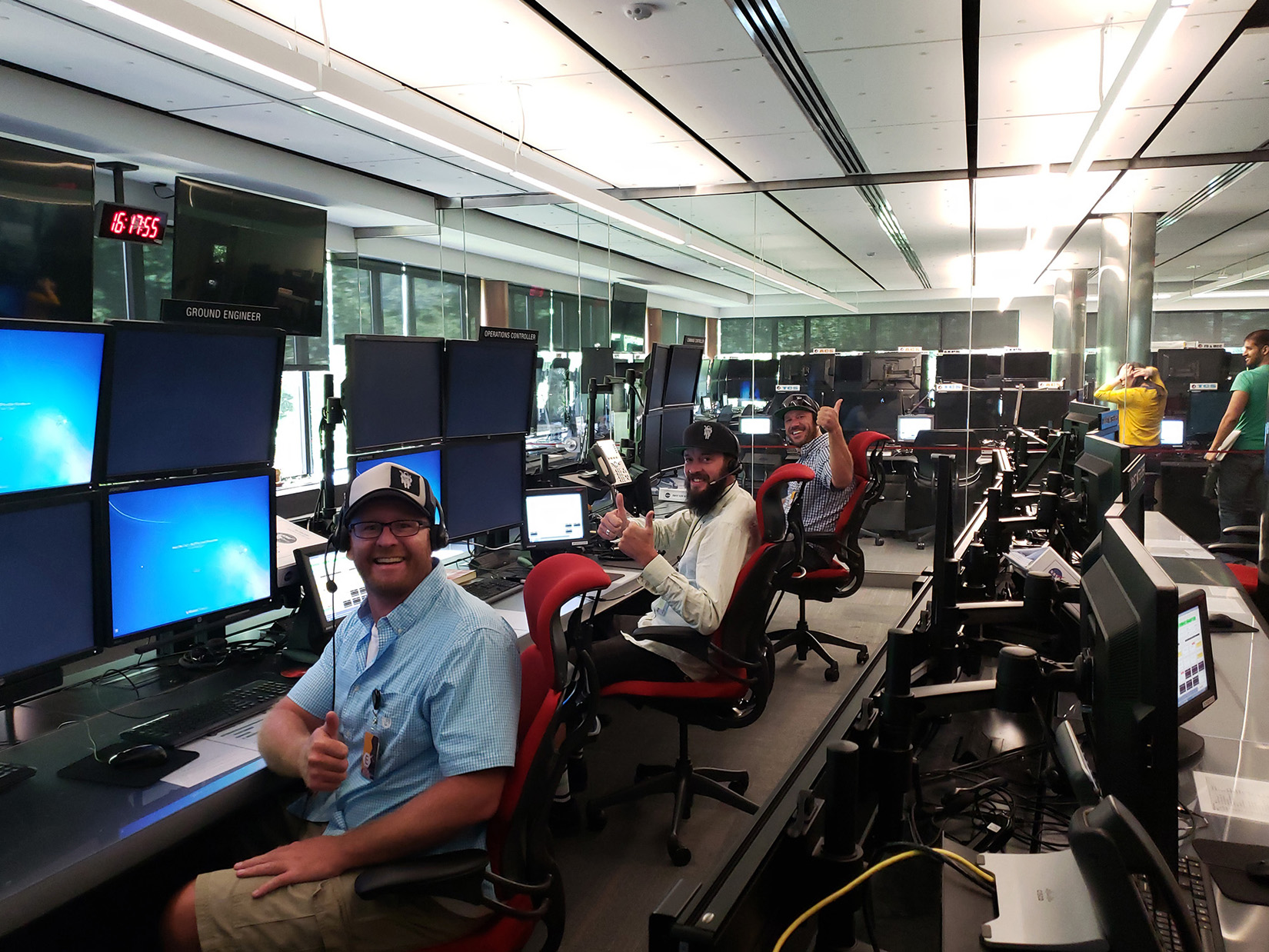 The Sabelhaus Flight Control Room is similar to what you've seen in NASA-related hollywood movies like Apollo 13, but more modern and less cavernous. It's also incredibly comfortable and has a great view! It's essentially a series of strategically-placed work stations where all of the day to day operations of the telescope are orchestrated. The computer furthest from the camera (where I am sitting) is where the Command Controller sits. That is the console from which ALL commands to the JWST will be sent! The other two forward most seats belong to the Operations Controller and the Ground Engineer. 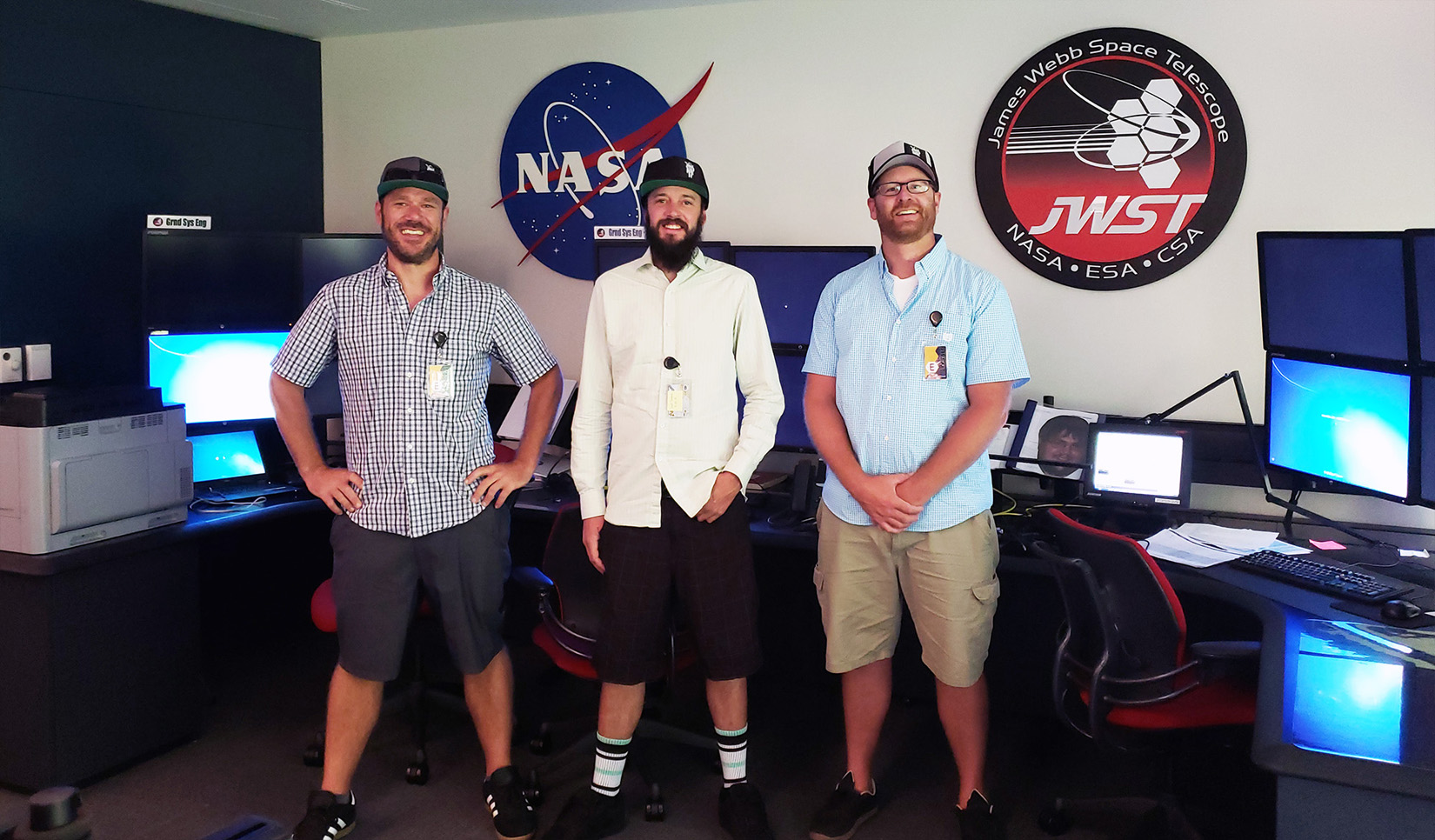 Off to the side of the Flight Control Room sit the Ground System Engineers (behind where Scott, Kelsen, and I are standing in this photo). These guys are basically the super IT experts that are tasked with ensuring all of the critical ground-based communication and networking facilities are fully functional and performing perfectly. If you thought normal IT work was stressful, imagine being the main lifeline to a 7 billion dollar satellite ... I have much respect for the weight of this position. 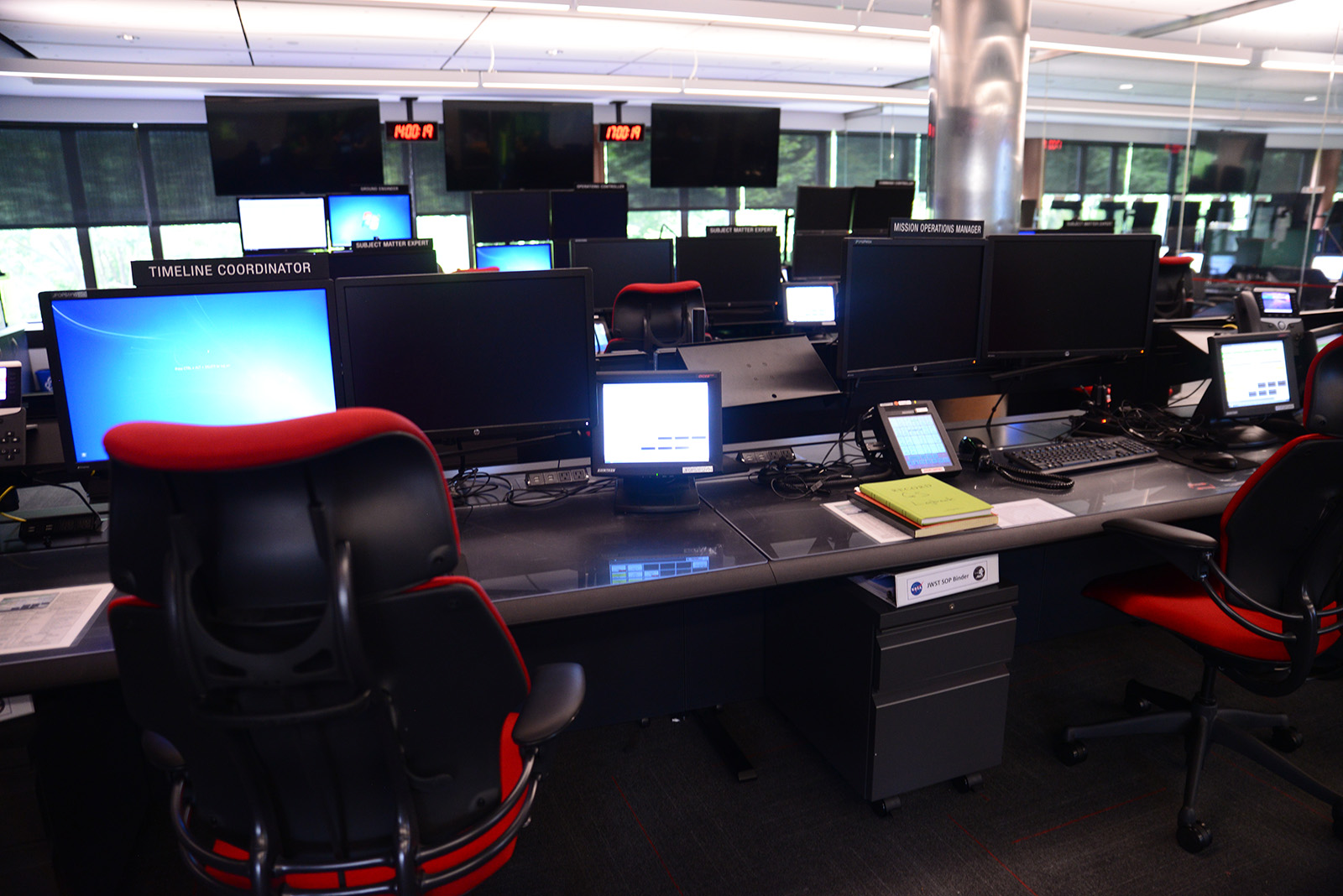 The rest of the seats in the Flight Control Room are occupied by the other essential control staff, as well as varying Subject Matter Experts who might normally work elsewhere but are critical to the day's activities (say, the unfurling of the heat shields or bringing a specific instrument online for the first time). 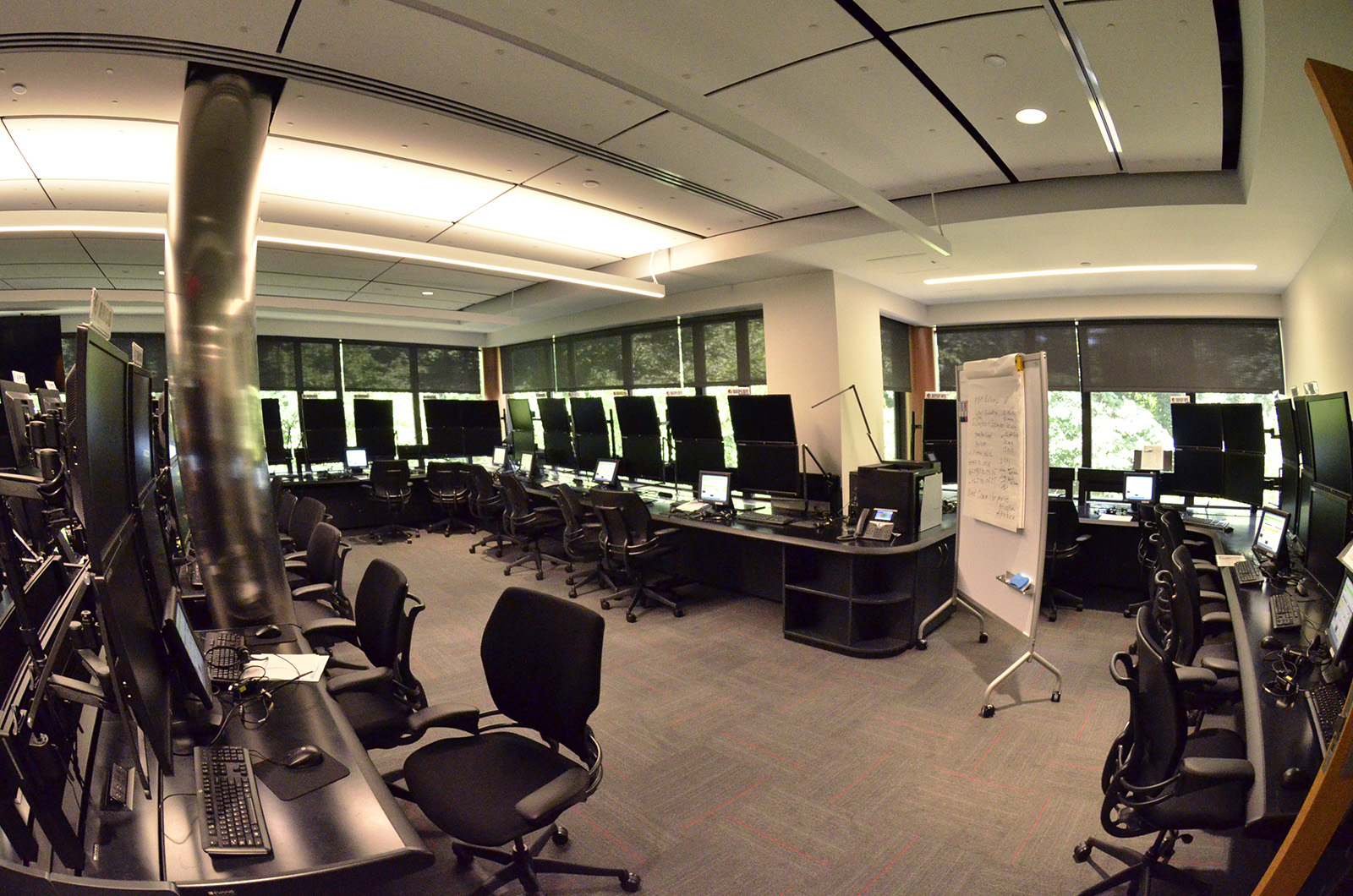 Directly adjacent to the Flight Control Room sit teams of engineers, who will rotate in or out as required based on the current phase of the mission. These engineers are integral to the myriad operations that the JWST will be asked to undertake throughout its life, and are in direct communication (sometimes via hand-signal through the glass walls) with the crew in the Flight Control Room. 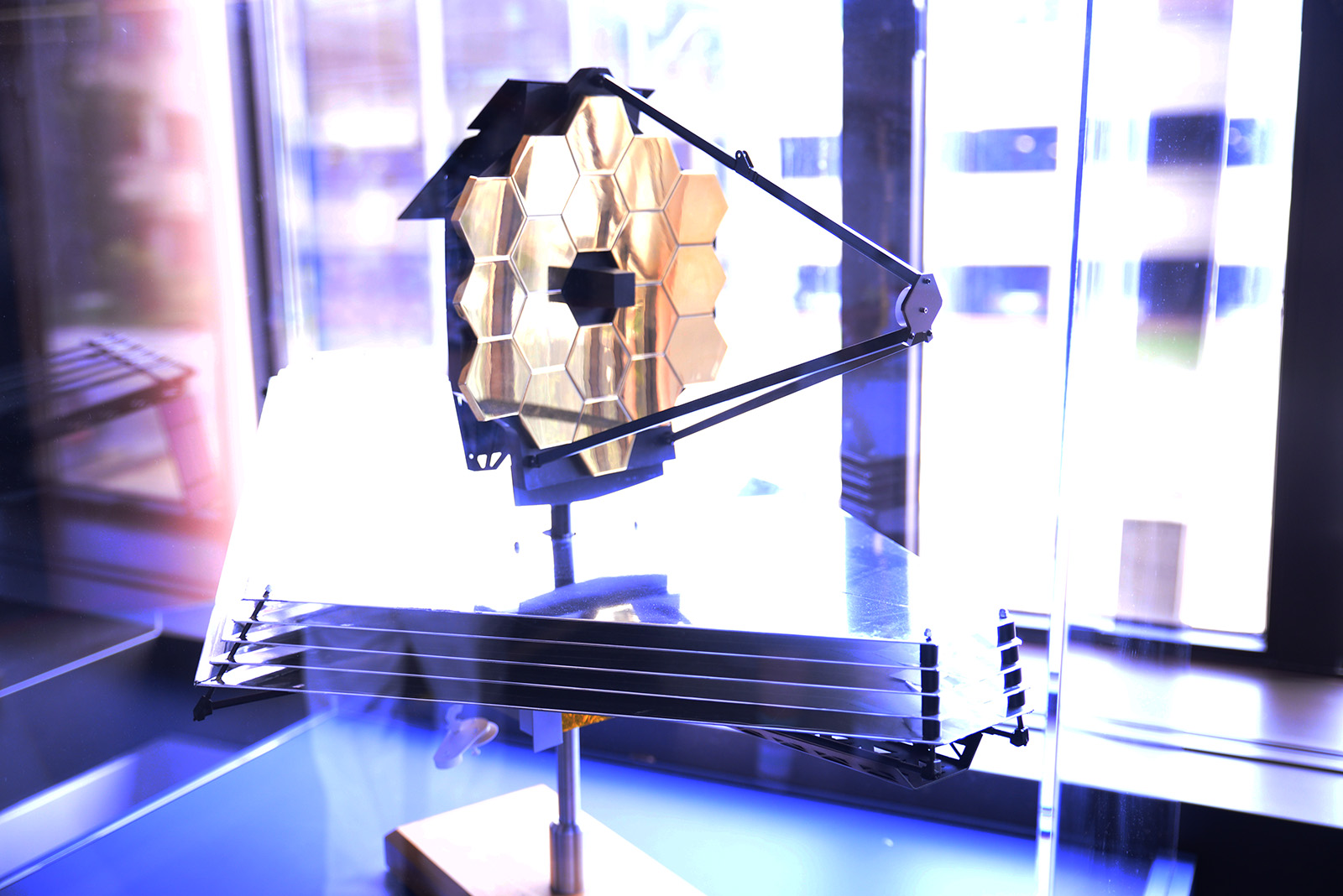 It was incredible to stand around with Carl, Carl, and Steve and get to ask questions about the telescope. And there was always a miniature nearby to help elucidate a specific point. "So ... how do you test the focusing system on earth, just point it at a spot on the far wall of the hangar?" ... "Not exactly." (Turns out it's all about those amazing actuators!) 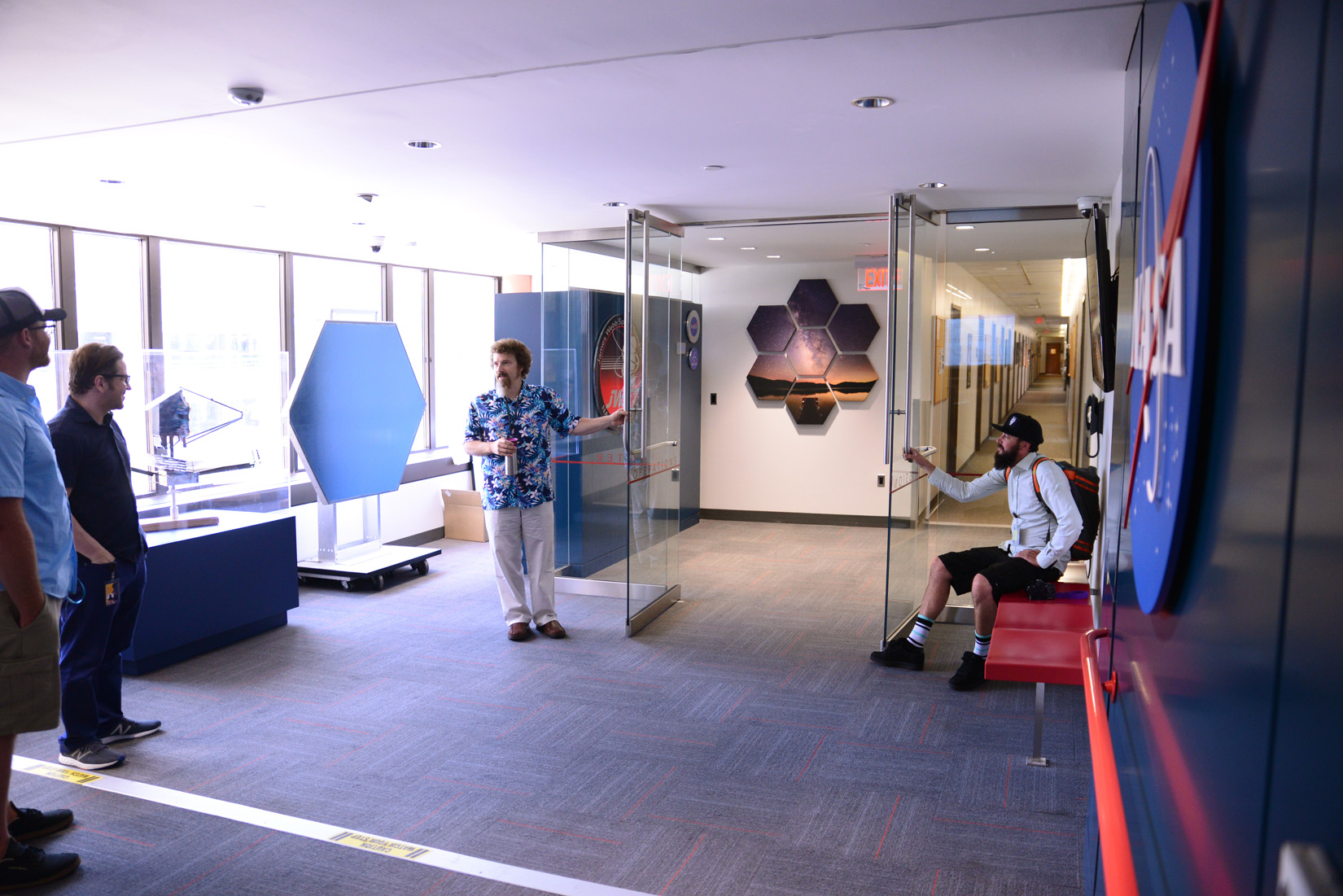 The piece hangs directly across from the doors to the JWST Mission Operations Center. The two Carls along with my friends Scott and Kelsen, showing off the placement of the hexagon piece. 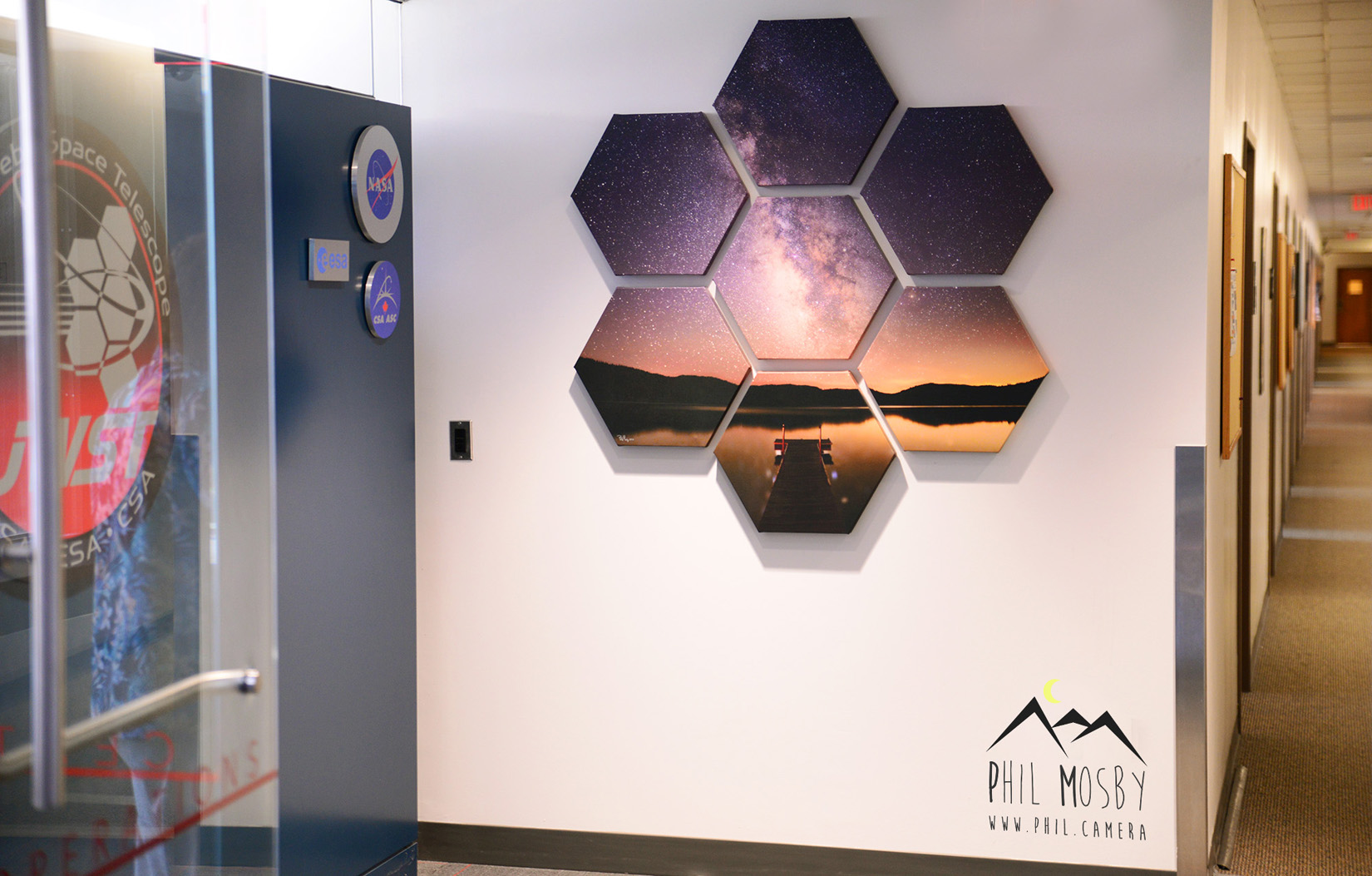 I'm always honored to know my art is hanging on ANY wall. But this wall is special. And that is the understatement of the decade. 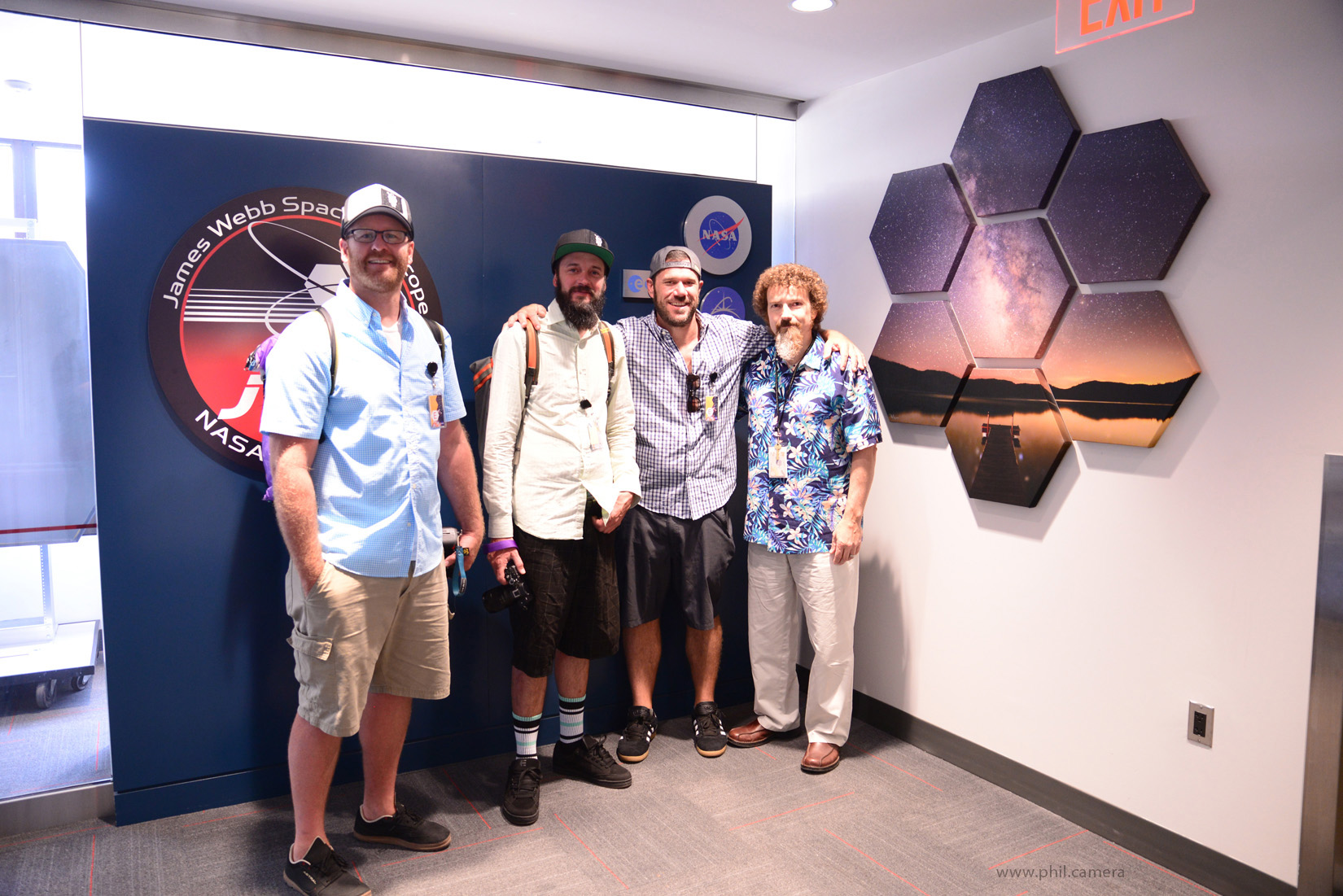 It was every space-lover's dream to hang out with these guys and pick their brains. And besides being brilliant, they're just really cool guys to talk to. Thank you to Carl, Carl, Steve, and the rest of the crew for the unforgettable tour, and for letting me be a tiny footnote in the history that you are working daily to create. I hope you enjoy my art for many years to come. I'll be watching with wonder along with the rest of the world as you continue to push humanity's collective view of the universe (and our place in it) further than ever before.
My limited-edition, handcrafted hexagon clusters are available via special order and on auction.


Please note: The placement of this art at the JWST Mission Operations Center in no way implies an endorsement or any kind of relationship between myself and NASA, STScI, the JWST program, or any other individual or organization. The piece was gifted to the Space Telescope Science Institute by Phil Mosby.